DOE’s Hanford site, located in southeastern Washington state, was formerly used to produce plutonium for national defense. Nuclear reactors irradiated uranium fuel elements, followed by chemical processing to separate the isotopes of interest. During these processes, some of the liquid processing waste was disposed of in the subsurface. DOE manages the cleanup of these wastes and associated contaminated environmental media. Contamination includes organic compounds, such as solvents used in chemical processing, and a range of radionuclide and inorganic compounds.

DOE (2010b) estimates that liquid waste containing about 0.9 million kilograms of carbon tetrachloride was released to the soil column, out of which about 120,000 kg is in the aquifer (DOE 2008b). The groundwater is located 260 to 330 ft below the ground surface. The groundwater is contaminated with multiple contaminants, with the most prevalent including carbon tetrachloride, technetium-99, iodine-129, tritium, uranium, chromium, and nitrate. The contaminant plumes in the groundwater are large, with a carbon tetrachloride plume size of about five square miles (Figure 64). Extensive characterization through the installation of wells and sampling was conducted from 2004 to 2006 as a part of the remedial investigation and feasibility studies. The vadose zone and the groundwater in the 200-ZP-1 OU were studied to identify and locate carbon tetrachloride dense nonaqueous phase liquid (DNAPL) source terms. The results of this characterization are documented in Carbon Tetrachloride Dense Non-Aqueous Phase Liquid (DNAPL) Source Term Interim Characterization Report (DOE/RL-2006-58) and its addendum (DOE/RL-2006-22). The conceptual site model developed in those reports supports a DNAPL source term in the vadose zone at the 216-Z-9 Trench at a depth of 65 ft. The data obtained do not indicate a DNAPL source in the 200-ZP-1 OU groundwater.

Aquifer materials are an interstratified fluvial lacustrine sequence of unconsolidated to semiconsolidated clay, silt, sand, and granule-to-cobble gravel deposited by the ancestral Columbia River. A tall (up to 80 feet), extensive groundwater mound that was created while wastewater was discharged during former site operations is diminishing to the point that the water table has decreased by several yards over the last 25 years, resulting in significant changes in groundwater flow velocity and direction.

Remediation objectives target drinking water standards. Protection of the Columbia River is also of concern, but the river is more than 12 miles downgradient of the area of contamination. In addition to federal and state regulatory agencies, tribal rights affect the site and active stakeholder organizations are present. 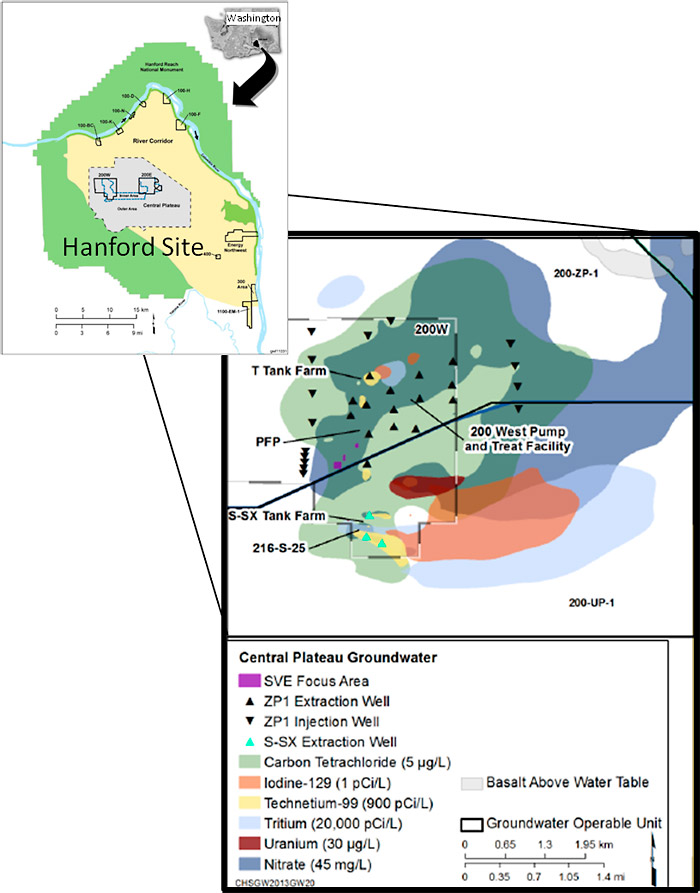 To stop contaminant loading to groundwater through vapor phase transport, especially from the vadose zone source of carbon tetrachloride, an active SVE system was installed (DOE 2007b). SVE was initially installed as a part of the CERCLA interim action and expanded after a final ROD in 2011 (Smith and Stanley 1992).

The primary sources for this carbon tetrachloride are three waste sites (216-Z-9 Trench, 216-Z-1A Tile Field, and 216-Z-18 Crib) used from 1955 to 1973 for the disposal of waste liquids from historical Plutonium Finishing Plant process operations (Figure 65). Figure 65 shows all wells located near the three waste sites that are used to support active SVE operations. 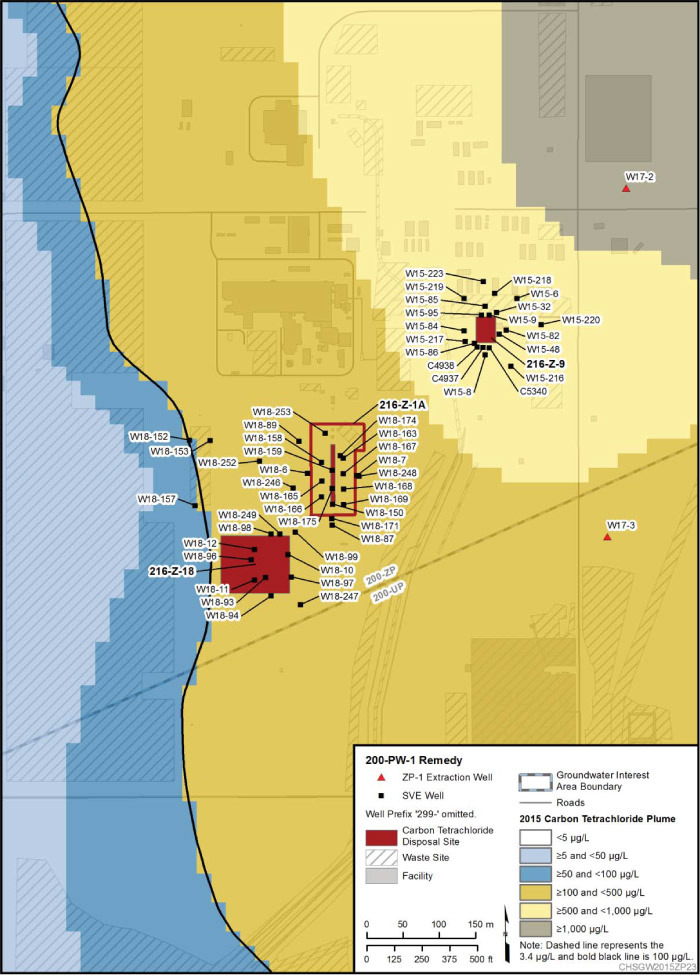 The purpose of the SVE operations near these waste sites is to mitigate the threat of carbon tetrachloride vapors migrating through the soil column and contaminating the underlying groundwater. A total of 80,107 kg of carbon tetrachloride have been removed from 1992-2012 from the vadose zone (Figure 66) through the processing of 118 billion cubic meters of soil vapor (USEPA and United States Department of Energy and Ecology 2011). The concentration of carbon tetrachloride declined from approximately 30,000 ppmv in 1993 to below the final clean up level of 100 ppmv in 2013. In November 2015, USEPA concurred that the SVE remedy met the RAOs in the ROD and that the soil vapor extraction activities could end. A response action report was prepared in 2015 to close out the SVE portion of the 200-PW-1 OU remedy in the ROD. During SVE operations, vapor-phase carbon tetrachloride was extracted through multiple vadose zone locations. 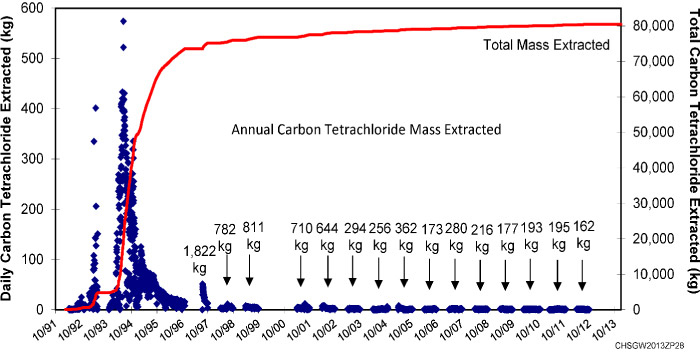 Passive SVE systems were also installed in 1999 at eight wells near the vadose/groundwater interface at the 216‑Z‑1A/216‑Z‑12/216‑Z‑18 well field. The passive systems have check valves that allow only soil vapor flow out of the borehole (one-way movement) and canisters holding granular activated carbon that adsorbs carbon tetrachloride upstream of the check valves before the soil vapor is vented to the atmosphere. The check valve prohibits flow of atmospheric air into the borehole during a reverse barometric pressure gradient, which tends to dilute and spread carbon tetrachloride vapors in the subsurface. The wells are sampled periodically upstream of the granular activated carbon canisters. During 2009, the maximum carbon tetrachloride concentrations ranged from 5 to 17 ppmv. Because of low extraction and high maintenance, the system is no longer in operation.

In the groundwater, numerous wells have been installed and monitored over the last 25 years as part of remedial investigation activities (DOE 2006). An interim remedial measure P&T system was initiated in 1994 to prevent carbon tetrachloride from spreading. During the interim remedial measure, carbon tetrachloride concentrations decreased in the original target area and more than 24,000 lb of carbon tetrachloride were removed from groundwater and treated. The interim remedial measure and remedial investigation provided data to define the nature and extent of the plumes. In addition, laboratory studies have been conducted to provide a technical basis to estimate the important contaminant fate and transport parameters. These studies have determined sorption parameters and natural attenuation evaluations, such as evaluating the rate of carbon tetrachloride abiotic hydrolysis under aquifer conditions (for example, Amonette et al. 2012, Truex et al. 2001). With the groundwater hydraulic gradient declining toward pre-Hanford conditions, groundwater flow is slowing. Because of the current high mass of contaminants in the aquifer, natural attenuation alone will not be sufficient to reach remediation objectives. If a portion of the contaminant mass is removed, however, then natural attenuation can then be effective in reaching remediation goals and can limit plume migration until concentration targets are reached. These objectives will require a lengthy time frame. DOE has administrative control over the site and it is expected to remain under federal control throughout the duration of the remedy.

A ROD was completed in 2008 and signed by USEPA, the DOE, and the Washington State Department of Ecology (USEPA and United States Department of Energy and Ecology 2008). The ROD specifies a period of P&T remediation to reduce the mass (by about 95%) and concentration of contaminants in the aquifer over an expected 25-year operational period. The remedy then transitions to a period of natural attenuation expected to control plume migration. Up to 100 years will be required to achieve RAOs.

The selected remedy was Alternative 3 (P&T, MNA, flow path control, and IC). The system was designed to capture and treat contaminated groundwater to reduce the mass of carbon tetrachloride, total chromium (trivalent and hexavalent chromium), nitrate, trichloroethylene, iodine-129, and technetium-99, throughout the 200-ZP-1 OU by a minimum of 95% in 25 years. The P&T component was designed and implemented in combination with MNA to achieve cleanup levels for all COCs in 125 years. Carbon tetrachloride concentrations in the groundwater above 100 μg/L correspond to approximately 95% of the mass of carbon tetrachloride currently residing in the aquifer. The estimated pumping rate required to reduce the mass of COCs by 95% in 25 years is 1,600 gpm for this action. The fate and transport evaluation estimated that a system comprised of 27 extraction and 27 injection wells would be needed to achieve the design requirements.

For the MNA component, fate and transport analyses conducted as part of the feasibility study (DOE 2007) indicate that the time frame necessary to reduce the remaining COC concentrations to acceptable levels will be approximately 100 years. Modeling also indicates that this portion of the plume area will remain on the Central Plateau geographic area during this time frame. Flow-path control is also required and will be achieved by injecting the treated groundwater into the aquifer to the northeast and east of the groundwater contaminant plumes to reduce and locally reverse the natural eastward hydraulic gradient in the aquifer. The mounding of groundwater in the aquifer from these wells slows the natural eastward flow, keeps most of the COCs within the hydraulic capture zone of the extraction wells, and allows natural attenuation to reduce contaminant concentrations.

Injection wells installed to the west (upgradient) are used to recharge the aquifer, steepen hydraulic gradients to the east, and minimize the potential for groundwater in the northern portion of the aquifer to flow northward through Gable Gap toward the Columbia River. At present, an average of 25 extraction wells and similar number of injection wells are operating with an average extraction rate of 2,000 gpm. The extraction rate is planned to as high as 2,500 gpm soon. Figure 67 shows the configuration of the P&T system in the area. 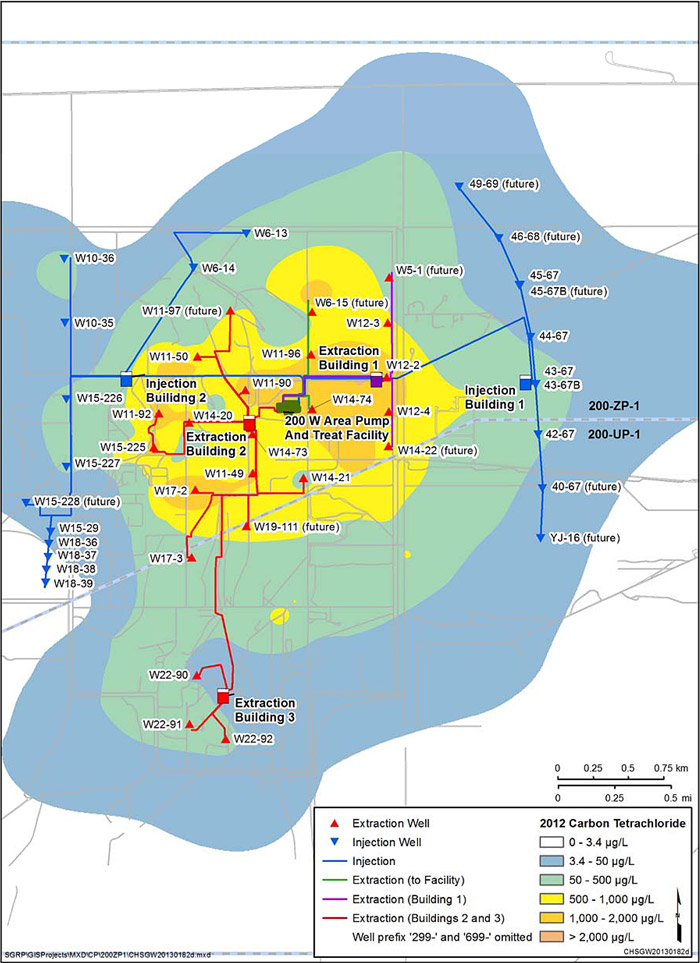 The P&T is applied to contain the plume and remove contaminant mass under conditions where P&T can be effective. Given the expected diminishing effectiveness of P&T in addressing the heterogeneous aquifer and reaching low concentrations, the remedy transitions to MNA. MNA has been evaluated as an effective means to reach RAOs and prevent plume migration once COC concentrations are lower. Because of the large plume and slow attenuation rates, a long time will be required to meet the RAOs. Federal control of the site will enable application of suitable ICs to prevent exposure during the remedy time frame.

Monitoring will be implemented in conjunction with the remedy and will verify that plumes are being reduced to obtain conditions suitable for a transition to MNA. P&T operations can be optimized as needed based on these data. Monitoring is also planned during the natural attenuation period to fulfill the requirements of a MNA remedy. ICs will be administered by the DOE as part of their ongoing management of the site.

The Tri-Parties developed the Hanford Site Tri-Party Agreement Public Involvement Community Relations Plan (CRP) in 1990 as part of the overall Hanford Site cleanup process. The CRP was designed to promote public awareness of the investigations and public involvement in the decision-making process. The CRP emphasizes an ongoing, interactive relationship with stakeholders.

A Federal Advisory Committee Act (FACA) chartered board was created specific to Hanford, and is called the Hanford Advisory Board (HAB). All discussions and meetings are open to the public. The HAB issued formal advice that was either specific to (Israel 2006) or relevant to (NAVFAC 2010b) this remedial action. The HAB, the state of Oregon, and stakeholders have had a long-standing focus on groundwater cleanup, and have influenced the remedy selection both directly and indirectly.

The following activities were conducted as part of the community participation process specific to CERCLA remedial action decisions: