The most challenging sites at NAS JAX includes several chlorinated solvent plumes and other contaminant areas at OU 3 (Figure 28). OU 3 is the largest site at NAS JAX and includes over 100 buildings that historically housed dry cleaning, painting, stripping, degreasing, and electroplating operations. These operations resulted in significant soil and groundwater contamination. The OU 3 primary tenant is FRCSE. In 1993, the NAS JAX Team began a multiphase RI/FS that supported the development of the September 2000 ROD. This ROD documented the selected remedies for six of the eight source areas for chlorinated solvent plumes. The remaining two source areas require further assessment and will be addressed later.

A former dry cleaner (former Building 106, Source C) and a former solvent recycler (Building 780, Source D) located in the northern area of OU 3 were the subject of interim remedial actions (IRAs). These remedies were adopted as final remedy components in the 2000 ROD and consisted of air sparging with soil vapor extraction (AS/SVE) at former Building 106 and groundwater P&T and SVE at Building 780.

Source Areas A, B, and E are in the central areas of OU 3. These areas did not initially require active remedial action because there was no documented impact to receptors and therefore no completed exposure pathways. Areas A and B eventually were placed in MNA programs. Source Areas F and G were identified in the southern area of OU 3. Initially, chemical oxidation was selected to treat Source Area F; however, studies found that conditions were not suitable for chemical oxidation and no source treatment was conducted at that time. The selected remedy for Area G is MNA. 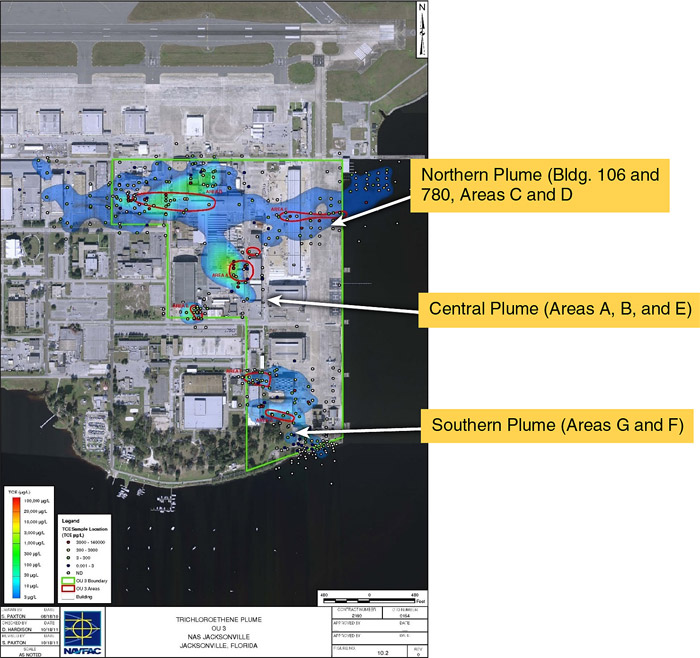 Because of these findings, initial remedial actions adopted for Buildings 106 and 780 in the north end of the site were discontinued and additional site risk characterization was planned.

After the findings of the optimization studies and Five-Year Review process, the NAS JAX Team reached consensus that adaptive site management and a comprehensive remedial approach was needed to protect potential receptors, including additional site characterization, CSM refinement, and exposure pathway risk determination (Figure 28). NAS JAX Team concluded that the original area-by-area approach was ineffective in reaching site objectives. The team adopted an OU-wide risk-based remediation approach in which RI and FS Addendums and a single replacement ROD would be developed to address the multiple source areas and comingled plumes at OU 3 (Figure 29). 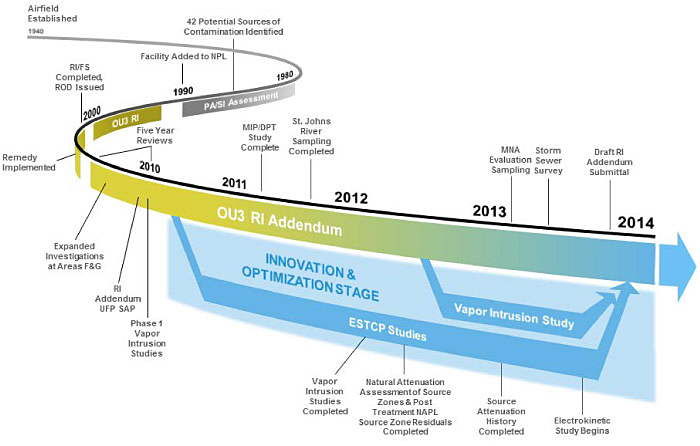 The NAS JAX Team developed and implemented innovative methods to investigate subsurface to indoor air VI within and near FRCSE. This project included a systematic screening and prioritization process to select the highest priority buildings, the use of emerging field and laboratory analytical methods, and stakeholder involvement throughout the project. Accomplishments included the following:

Proven and innovative site characterization methods were used to develop a more thorough understanding of COC distribution in the subsurface at OU 3. NAS JAX Team used the Triad Approach to iteratively address groundwater data gaps using direct push technology (DPT) and other screening methods to efficiently locate additional monitoring wells and refine the CSM. ESTCP demonstrations of innovative technologies were used to characterize the distribution of DNAPL contamination present in low-permeability layers at OU 3 and the potential for back-diffusion to serve as a long-term source to groundwater plumes. An ESTCP demonstration also characterized the potential for source zone natural attenuation.

The following innovative technologies were demonstrated at OU 3 to improve understanding of DNAPL distribution and aid in the design of remediation systems:

Studies evaluated the tidally influenced stormwater system by conducting sampling throughout tidal cycles at various locations upgradient and downgradient of the point of entry for source areas at Areas A, E, F, and G. The potential impacts of COCs in storm sewers was then evaluated using mixing zone models to estimate the mass and concentration of COCs at discharge points to the St Johns River that were not directly accessible. Results demonstrated that storm sewer discharge of contaminated groundwater to the St. Johns River did not pose a significant ecological or human health risk.

In addition, offshore sampling was conducted through a variety of methods to characterize the nature and extent of COCs migrating beyond the shoreline in groundwater below a clay layer that extends beneath the river. Sediment pore water quality was evaluated by collecting samples at the interface zone in shallow sediments. Sampling tools included DPT methods from a barge anchored in target off shore areas and use of the Trident Probe to collect pore water samples within shallow sediment horizons (Figure 30).

Results of the offshore investigation supported the conclusion that biodegradation processes within organic rich sediment of the river effectively reduce COC concentrations to below applicable regulatory thresholds and there is no significant exposure risk from direct migration of contaminated groundwater to surface water.

The RI Addendum (2015) includes the results of the additional site characterization, including detailed evaluations of nature and extent of contamination, fate and transport, and risk assessment. 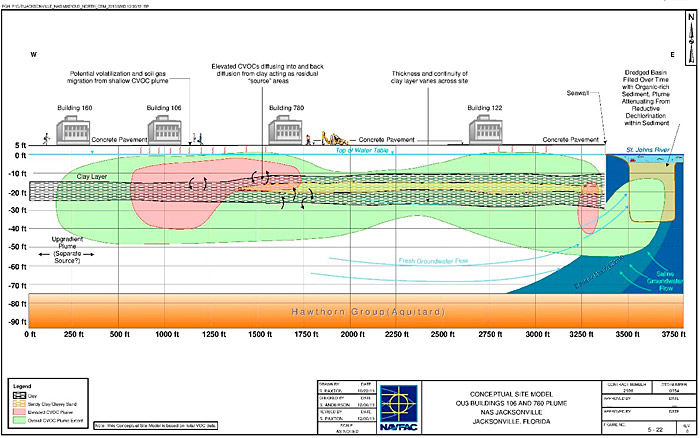 An FS addendum will evaluate further remedial options for the northern, central, and southern source areas at OU 3 to support the site objectives. Long-term monitoring to ensure protection of receptors will be part of any remedy selected. To assist with the remedy evaluation and selection process, the NAS JAX Team commissioned a series of source zone technology demonstrations and pilot studies in the northern and southern areas of OU 3. Demonstration project results will be evaluated in the FS Addendum to support the site-wide replacement ROD. Treatability/pilot studies include the following:

The combined results of these pilot studies will be evaluated during the sitewide FS Addendum.

USEPA and FDEP regulators are partnering members with the Navy on the NAS JAX Team, which typically meets bimonthly to review current data and reach consensus on the path forward for OU 3 and other sites at NAS JAX. The formal partnering process at NAS JAX has improved communications and decision making, and has resulted in an efficient and protective site remediation program. NAS JAX Team’s commitment to continuous optimization and the use of innovative technologies at OU 3 has saved approximately $2.5 million to date. In addition, successes and lessons learned through innovative technology demonstrations at NAS JAX have been shared throughout the Navy.

Community involvement in this process is provided by the Regional Advisory Board (RAB). Annual updates on the progress of work at NAS Jacksonville and OU 3 are provided to the RAB for their input. After the FS Addendum is completed, a proposed plan will be developed and broader community input solicited and addressed in the selection of a final replacement remedy for OU 3.